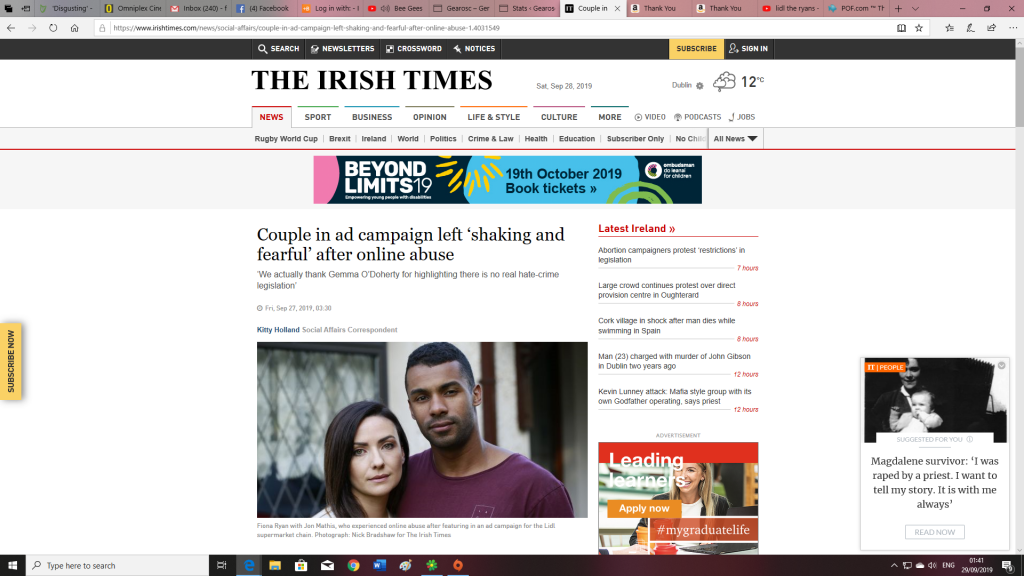 Lidl the German discount retailer latest advertising campaign has become mired in controversy. It introduced a mixed – race couple, a man from Brazil and a woman originally from Ireland, they wouldn’t be representative of Lidl shoppers but Lidl chose them for their ad campaign – Save money by shopping at Lidl. They are represented as the “Ryans” despite its the woman whose surname is Ryan and not the man’s, this is against tradition as well. My objection is there are taking a swipe at Irish men trying to suggest we are unfit for breeding and foreign men are better, its prima nocta by any name whilst Irish men are made to pay for the child benefit and possibly the lone parents allowance as well.

Also I nearly sure its not the first time that Lidl has made a advertisement of this nature, they seem to be made by women as the advertisements are never the other way around (Irishwomen don’t “stick” it to themselves that’s for sure). Further more a tweet made by former Irish Independent Gemma O’ Doherty was pulled by Twitter after objections made by the couple.

Maybe what people are objecting to is the “Social engineering” the ad makers are trying to do, portraying it as being acceptable and the “new normal”. Maybe Lidl would stick to its lower end of the groceries market and leave the social engineering to some one else or ask people if they want it.

Just watched Laura Brennan -This is me on RTE 1 and I must say that I was moved by the programme.

Laura from Ennis in Co. Clare contracted Cervical cancer after being infected with the Human papillomavirus (HPV). She was diagnosed with a Terminal condition basically the cancer had spread to other parts of the body and was untreatable. She showed a brave face with the fact that she had given only two to five years to live and got the news of her cancer at only 23/24 years of age.

Life is only starting for a lot of people at that age. She set about raising the issue that the HPV vaccine was only taken up by 51% of school girls and that take up of the vaccine should be a lot higher and could possibly save their lives later on. She (Laura) did much to highlight the use of the HPV vaccine and so prevent others from developing similar conditions. She admitted that she got HPV from sexual contact, it is a STD (Sexual Transmitted Disease). She received some “hate mail” from ignorant people but it didn’t effect her. She struggled on with the disease as it began to spread to other parts of the body and increase in severity.  Her condition gradually got worse and it was time to say her goodbyes to loved ones, after a series of trips to Hospital she passed away on March 20th 2019 at the age of 26.

May She rest in Peace.

Just watched the news on France 24 this afternoon and featured Boris Johnson British Prime Minster on his short trip to Dublin. In his speech he referred to the North or Northern Ireland as being United Kingdom “Soil” as he talked about Watchtowers in the border region before 1998. Who is he codding, the north isn’t British “Soil” its Irish “Soil” and cannot be British as it physically impossible for it to be so. The Brits get amnesia about how they set up the Orange state, they forced the partition of “Ireland” against the wishes of the majority of Irish people and set up a puppet state in the 26 counties, setup with English guns & money. In the more or less hundred years since partition, the British haven’t felt the need to give it back despite all the trouble in the North.

To this end our Taoiseach says he regards Britain as “Our friend and Ally” despite the history, geography of Ireland and the British having a cheap food policy which mainly keeps Agricultural Ireland with small/tiny margins on their produce. I wouldn’t describe “Ireland” as being an friend of Britain while they hold onto the North, six counties or Northern Ireland or whatever they call it now. You can do business with the British but don’t describe them as “Our friend and Ally” , they are nothing of the sort. Maybe the Dublin establishment will take note.